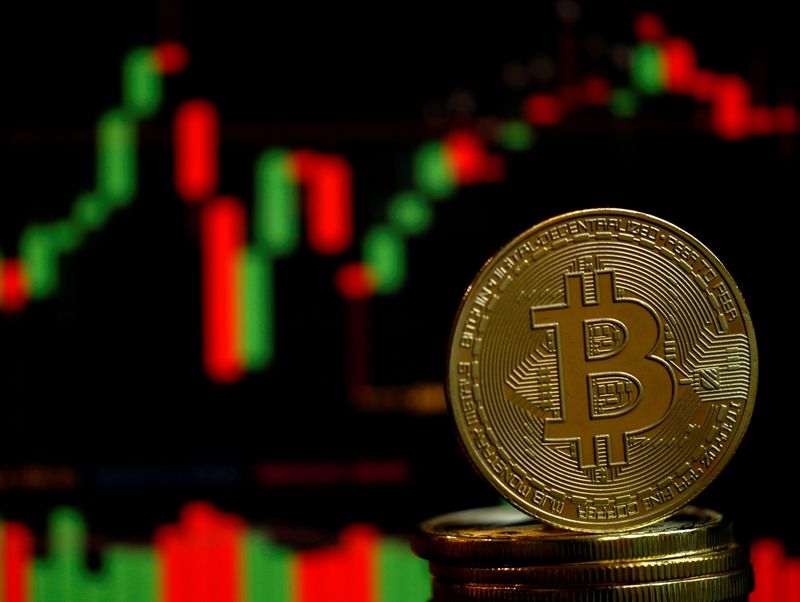 © Reuters. A representation of the virtual cryptocurrency Bitcoin is seen in this picture illustration taken June 14, 2021. REUTERS/Edgar Su/Illustration

LONDON/HONG KONG (Reuters) -Bitcoin on Tuesday fell below $30,000 for the first time since January, adding to losses sparked a day earlier when China’s central bank deepened a crackdown on cryptocurrencies.

The world’s largest cryptocurrency slumped over 7% to $29,332, its lowest since Jan. 27, after giving up gains made in Asian hours. Its fall pushed down smaller coins such as ether.

Bitcoin tumbled over 10% on Monday, its largest one-day drop in over a month, with losses of nearly 30% in the last week alone almost wiping out gains for the year-to-date. It was last down 6.7% at $29,560.

The sell-off was sparked by the People’s Bank of China (PBOC) urging China’s largest banks and payment firms to crack down harder on cryptocurrency trading, the latest tightening of restrictions on the sector by Beijing.

Crypto exchanges were effectively pushed out of China by a 2017 rule change, but over-the-counter (OTC) platforms based overseas have sprung up to receive payment from people based in China and buying cryptocurrencies on their behalf.

“It basically says now OTC transactions are not legitimate … we are not allowed by the banks to transfer money for cryptocurrency purchases and sales,” said Bobby Lee, chief of cryptocurrency wallet app Ballet and formerly CEO of BTC China, China’s first bitcoin exchange.

After Monday’s PBOC statement, banks including Agricultural Bank of China (OTC:ACGBF) and Ant Group’s ubiquitous payment platform Alipay said they would step up monitoring to root out crypto transactions.

Bitcoin has plummeted by more than half from its April peak of almost $65,000. Year-to-date, it remains up about 2%.

Ether, the second-biggest cryptocurrency that tends to move in tandem with bitcoin, fell over 6% to $1,773, its lowest in a month.

Last month, three industry associations issued a similar ban on crypto-related financial services, though market players said it would be hard to enforce as banks and payment firms could struggle to identify crypto-related payments.

“We are definitely in the midst of a correction,” said Anthony Wong of Hong Kong-based crypto firm Orichal Partners.

“This time China’s iron-fist ban on crypto seems to be more serious than back in 2017 as the directive came straight from the top.”

Already in Beijing’s sights were cryptocurrency miners. China’s State Council, or cabinet, said last month it would tighten restrictions on producers as well as traders of bitcoin.

Authorities in major bitcoin mining hubs including Sichuan, Xinjiang, and Inner Mongolia have issued their own curbs with greater details on the restrictions.

Evidence of the impact of the curbs is emerging. The so-called hash rate of the bitcoin network – a measure of its processing power that shows how much mining is taking place, on Monday hit its lowest level since late 2020.

The crackdown on miners will likely hit prices in the short-term, market players said.

“Some of the miners in China may be more willing to sell their bitcoin now versus when they are able to run their mining operations, because they have to raise cash,” said Seth Melamed, of Tokyo crypto exchange Liquid.Bitcoin sinks below $30,000 as China crackdown deepens5