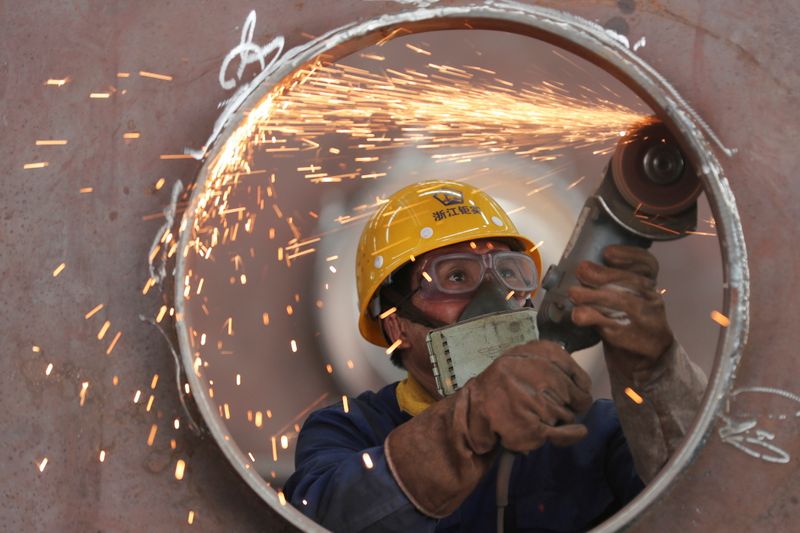 © Reuters. FILE PHOTO: An employee works on a production line manufacturing steel structures at a factory in Huzhou, Zhejiang province, China May 17, 2020. China Daily via REUTERS

That was a slowdown from the 57% surge reported in April, according to National Bureau of Statistics.

Imbalances in profitability became prominent between upstream and downstream firms due to high commodity prices, said Zhu Hong, an official at the statistics bureau.

“The foundation for recovery is not yet solid,” he said in a statement accompanying the data.

For the January-May period, industrial firms’ profits grew 83.4% from the same period a year earlier to 3.42 trillion yuan.

Factory-gate inflation saw its fastest annual growth in over 12 years in May driven by surging commodity prices, posing risks to profit margins for mid- and downstream firms.

Chinese policymakers have stepped up efforts in recent weeks to cool runaway metals prices, including selling supplies from state reserves, but with global demand continuing to recover some analysts believe the moves will have only a limited impact.

China’s official manufacturing data this week is expected to show weaker growth in activity in June, likely due to disruptions caused by COVID-19 flare-ups at the country’s major southern ports. In addition, investors will be looking to trends in input costs and selling prices for any further signs of margin pressure.

Liabilities at industrial firms were up 8.2% year-on-year at the end of May, versus 8.6% growth a month earlier.