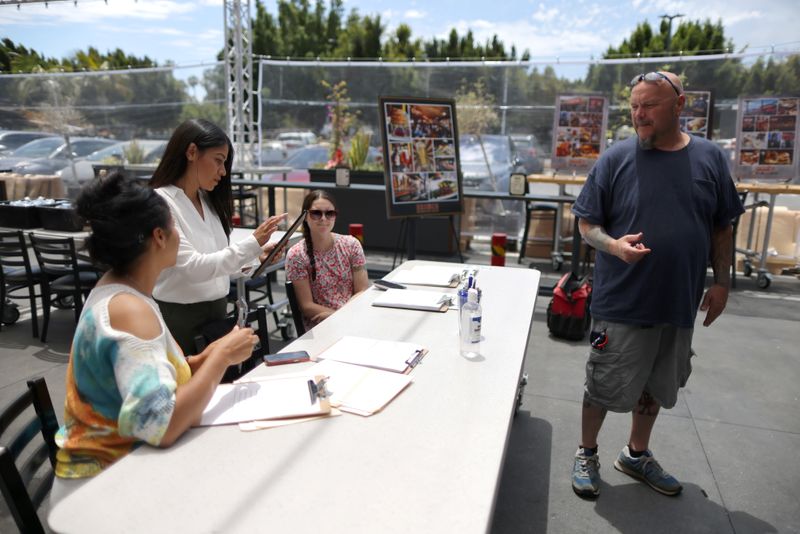 WASHINGTON (Reuters) – The number of Americans filing new claims for unemployment benefits fell more than expected last week, while layoffs plunged to a 21-year low in June, suggesting the labor market recovery from the COVID-19 pandemic was gaining traction.

While job cuts are easing, a shortage of willing workers is constraining hiring amid a surge in demand following a reopening of the economy made possible by coronavirus vaccinations. Nevertheless, the reports on Thursday augur well for the closely watched employment report for June, which is due to be released on Friday.

“America’s back to work and an important milestone was reached where new claims are back below the 400,000 barrier after a hiccup at the start of June,” said Chris Rupkey, chief economist at FWDBONDS in New York. “Summer is always the strongest season for hiring each year, and this year is no exception.”

Initial claims for state unemployment benefits dropped 51,000 to a seasonally adjusted 364,000 for the week ended June 26, the Labor Department said. That was the lowest number since March 2020, when mandatory shutdowns of nonessential businesses were enforced to slow the first wave of COVID-19 infections.

Data for the prior week was revised to show 4,000 more applications received than previously reported. The improvement in claims had appeared to stall in mid-June. Though claims remain above the 200,000-250,000 range that is viewed as consistent with a healthy labor market, they have tumbled from a record 6.149 million in early April 2020.

Economists polled by Reuters had forecast 390,000 applications for the latest week. There was a big decline in filings in Pennsylvania, which reversed the prior week’s surge. The state last month upgraded its filing system, and the transition could be causing volatility in the data. There were also large declines in claims in California, Kentucky and Texas.

The claims data could become noisy in the weeks ahead as 25 states with mostly Republican governors pull out of federal government-funded unemployment programs, including a $300 weekly check, which businesses complained were encouraging the jobless to stay at home. The early termination began on June 5 and will run through July 31, when Louisiana, the only one of those states with a Democratic governor, ends the weekly check.

For the rest of the country, these benefits will lapse on Sept. 6. There is no evidence so far of a surge in job searches in the 20 states that have already ended the federal benefits.

A survey this week by job search engine Indeed https://www.hiringlab.org/2021/06/29/indeed-job-seeker-survey-june-2021 found that while the vast majority of the unemployed indicated they would like to start looking for work in the next three months, many did not express a sense of urgency. But rising vaccinations, dwindling savings and the opening of schools in the fall will be key to pulling them back into the labor force.

The claims report showed the number of people continuing to receive benefits after an initial week of aid rose 56,000 to 3.469 million during the week ended June 19. There were 14.7 million people receiving benefits under all programs in mid-June, slightly down from 14.8 million early in the month.

“It is yet to be determined whether an early suspension of support measures will translate into substantially faster job growth,” said Rubeela Farooqi, chief U.S. economist at High Frequency Economics in White Plains, New York.

U.S. stocks were mixed in early trading. The dollar slipped against a basket of currencies. U.S. Treasury prices fell.

Lack of affordable child care and fears of contracting the coronavirus have also been blamed for keeping workers, mostly women, at home. There were a record 9.3 million job openings at the end of April and 9.3 million people were officially unemployed in May.

With at least 150 million Americans fully vaccinated against the virus, pandemic-related restrictions on businesses and mask mandates have been lifted. The reopening economy has led to a boom in demand, leaving businesses desperate for workers.

In a second report on Thursday, global outplacement firm Challenger, Gray & Christmas said job cuts announced by U.S.-based employers tumbled 16.7% to 20,476 in June, the lowest level since June 2000. Layoffs plummeted 88% compared to June 2020. There were 67,975 job cuts in the second quarter, the fewest since the April-June period in 1997. In the first half of this year, layoffs dropped 87% to 212,661, the lowest total for the January-June period since 1995.

“We’re seeing the rubber band snap back,” said Andrew Challenger, senior vice president at Challenger, Gray & Christmas. “Companies are holding on tight to their workers during a time of record job openings and very high job seeker confidence. We haven’t seen job cuts this low since the Dot-Com boom.”

According to a Reuters survey of economists, nonfarm payrolls likely increased by 700,000 jobs in June after rising by 559,000 in May. The unemployment rate is seen ticking down to 5.7% from 5.8% in the prior month.

On Tuesday, the Conference Board said its consumer confidence survey’s so-called labor market differential, derived from data on respondents’ views on whether jobs are plentiful or hard to get, surged in June to the highest level since 2000. Private employers hired more workers than expected last month.U.S. weekly jobless claims fall; layoffs at 21-year low as labor market healsAdd a Comment