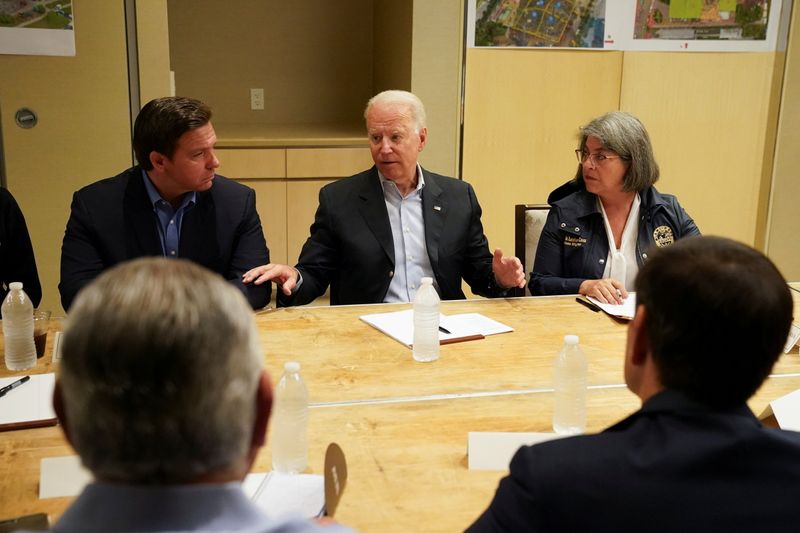 By Trevor Hunnicutt and Steve Holland

BAL HARBOUR, Fla. (Reuters) – Sitting next to one of his fiercest critics on Thursday, President Joe Biden managed to find a silver lining in the grave tragedy that brought them together.

“You know what’s good about this?” Biden asked Florida Governor Ron DeSantis, not waiting for an answer. “We’re letting the nation know we can cooperate.”

DeSantis, a Republican rising star closely tied to former President Donald Trump, is at the forefront of partisan fights across the country over anti-coronavirus lockdowns, racial justice protests and efforts to restrict voter access.

Yet in recent days the two rivals have come together over the collapse of a 12-story building in Surfside, Florida, more than a week ago that has killed at least 18 people, with another 145 missing and feared dead.

Biden has sent millions of federal dollars and scores of search-and-rescue personnel to assist local officials in combing the rubble of the Champlain Towers South for survivors, capped by the visit on Thursday.

As he spoke about unity during the brief portion of their meeting that was open to reporters, Biden looked DeSantis squarely in the eyes and the governor nodded in agreement.

“Thank you, Mr. President,” DeSantis said. “You recognized the severity of this tragedy from day one and you’ve been very supportive.”

“We’ve had no bureaucracy” and no delays in getting federal resources to Florida, he continued.

The encounter may be important to the Biden White House as it pursues a “reach across the aisle” strategy to build and showcase support for his presidency, particularly with a small group of “swing” voters. That’s an uphill battle with many Republicans, some of whom believe Trump’s repeated false claims that voter fraud led to Biden’s victory.

The effort seemed to impress at least one observer, Moshe Horowitz, who was staying at the hotel where Biden and DeSantis met.

“There should always be dialogue between both sides,” the New Yorker told Reuters as he tried to get a glimpse of the president outside the hotel. He said he opposes Biden’s policies so far but supported the show of bipartisanship.

“DeSantis and Biden meeting each other is a wonderful thing, and they should continue to do that,” he said.

In his January inaugural address, Biden pledged to “fight as hard for those who did not support me as for those who did.” He pushes for Republican support in Congress for his massive spending plans, and has made a point of visiting Republican-voting states to push infrastructure and COVID-19 vaccines. In Texas, following a deadly winter storm, he worked closely with Governor Greg Abbott, another Trump-tied Republican who did not initially acknowledge the Democrat’s election win.

DeSantis, who is widely seen as weighing a potential 2024 challenge for the presidency, has refused to comment on whether the 2020 election was rigged as Trump claims, but has complained about the Biden administration’s policies.

His office has declined to say whether he will attend a campaign-style rally Trump plans for Saturday in Sarasota.

Although Trump no longer holds public office and has only hinted at another presidential run, he continues to cast a long shadow over Republican politics. Officials close to the former president say he has instructed his team to collect relief aid for Surfside families at the rally.In Florida, Biden woos Trump ally DeSantis in unity pitch2