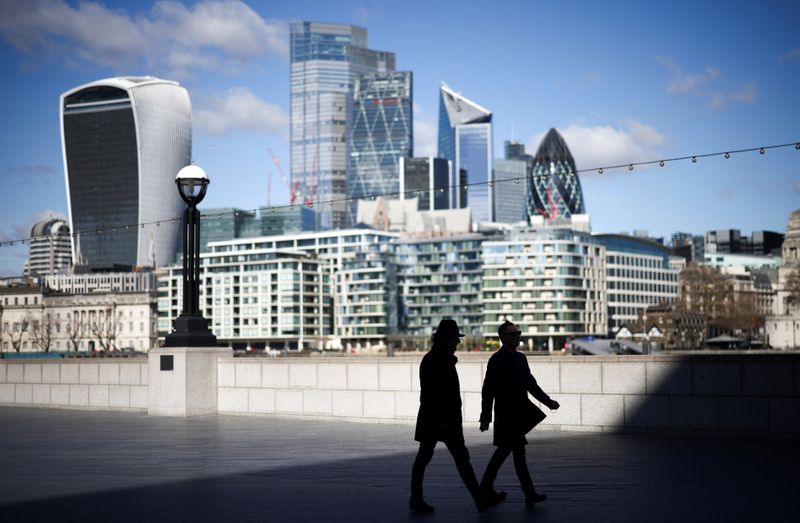 © Reuters. FILE PHOTO: The City of London financial district can be seen as people walk along the south side of the River Thames, amid the coronavirus disease (COVID-19) outbreak in London, Britain, March 19, 2021. REUTERS/Henry Nicholls

LONDON (Reuters) – Banks should ask the Financial Conduct Authority before using “credit sensitive rates” for replacing Libor, the tarnished benchmark which is being scrapped in December, the watchdog said on Monday.

The London Interbank Offered Rate or Libor is being ditched after banks were fined for trying to manipulate the rate for pricing mortgages, loans and derivatives worth trillions of dollars across several currencies globally.

Most contracts are being switched to “risk-free” overnight rates compiled by central banks, such as Sofr from the U.S. Federal Reserve and Sonia at the Bank of England.

But some market participants, particularly in the United States, plan to use “credit sensitive” rates based on transactions in commercial paper and certificate of deposit markets.

“We ask that any regulated UK market participants looking to use these so-called ‘credit sensitive’ rates in UK-based business consider the risks carefully, and raise with their FCA supervisors before doing so,” Edwin Schooling Latter, the FCA’s director of markets and wholesale policy, told a UK Finance event on Monday.

Liquidity in markets underpinning credit sensitive rates dried up and yields spiked during market turmoil in March 2020 when economies went into pandemic lockdowns, he said.

“So these rates may look relatively benign in ‘normal’ market conditions. But there can be a painful sting in the tail for borrowers at times of stress,” Schooling Latter said.

“The good news is that the bulk of outstanding dollar swap market positions are going to be moving to Sofr, not these risk-laden alternatives.”

While new products are referencing Sonia in Britain, there was still work to do in switching outstanding contracts and Schooling Latter urged markets to complete this by the end of the third quarter.

“It will help avoid risks of getting caught in a pre-Christmas rush – where we could see a squeeze in IT, legal or other resources, or would simply have too little time to adjust to unexpected hurdles,” he said.Ask us first before swapping Libor with ‘risk-laden’ rate, says UK watchdogAdd a Comment