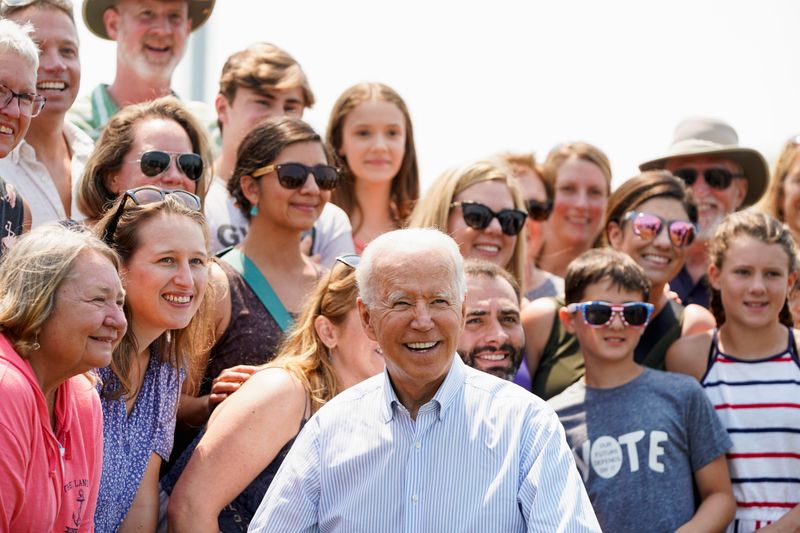 (Reuters) – U.S. President Joe Biden celebrated the nation’s 245th birthday on Sunday by opening the gates of the White House and calling on Americans to do their part to end the COVID-19 pandemic once and for all.

“This year, the Fourth of July is a day of special celebration for we are emerging from the darkness of … a year of pandemic and isolation, a year of pain, fear and heartbreaking loss,” Biden told a White House party opened to around 1,000 people, including military families and workers involved in the COVID-19 response.

“We never again want to be where we were a year ago today,” he added.

The largest White House event since Biden took office in January included burgers and fireworks and was geared toward giving Americans something to celebrate as signs of normalcy have returned following a coronavirus pandemic that has killed more than 600,000 Americans.

Still, the country has fallen short of Biden’s goal to have 70% of U.S. adults get at least one vaccine shot by Sunday. The figure is around 67%, as some people have resisted getting inoculated, raising concerns among health officials as the more aggressive Delta variant threatens to generate another surge.

Biden mourned the people who died, praised Americans who aided in the country’s emergency response and said vaccines were the best defense against new variants of the virus.

“It’s the most patriotic thing you can do,” he said of getting vaccinated.

But his administration was also eager to celebrate what it sees as its signature accomplishment – restoring some normality for a country weary of pandemic restrictions and hardship, burdens that have eased but not disappeared with the widespread availability of inoculations.

The pandemic forced cancellation of nearly all celebrations last year and led to a toned-down January inauguration for the Democratic president, who had to do without traditional black-tie galas and bipartisan comity as Republican former President Donald Trump disputed his election loss.

Fortress-like security around Washington following the Jan. 6 attack on the U.S. Capitol was eased as crowds marked the Declaration of Independence from Britain in 1776.

Fencing surrounding the White House has been dramatically scaled back, and the streets filled on Sunday with people who snapped photographs of the president’s motorcade returning from a weekend trip to a Michigan cherry farm, the golf course and his Delaware family home.

Speaking to people on the south lawn of the White House who had shed their masks to eat watermelon slices and drink beer, Biden said the coronavirus “no longer paralyzes our nation, and it’s in our power to make sure it never does again.”

After the speech, the president greeted guests and posed for photographs ahead of a 17-minute fireworks display to be set off later from both sides of the Lincoln Memorial Reflecting Pool (NASDAQ:POOL).Celebrating nation’s birth, Biden urges Americans to help end COVID-19 pandemic38Comments (38)