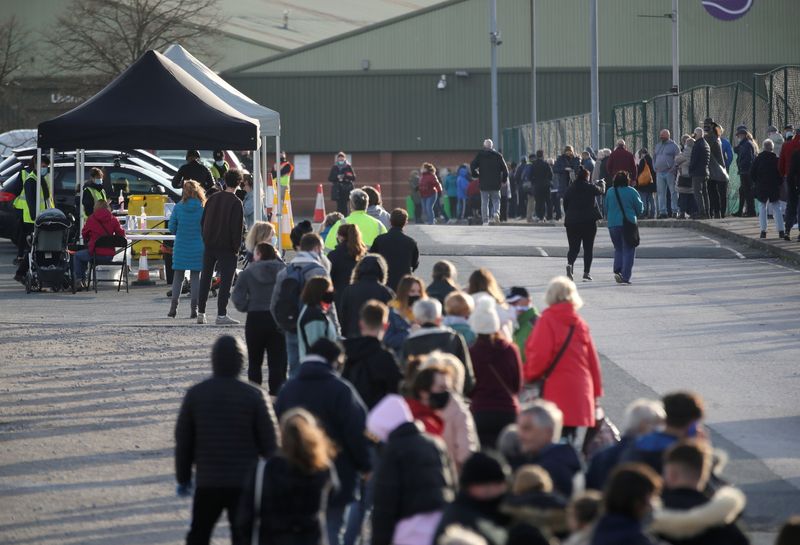 LONDON (Reuters) – A mass rapid-testing scheme reduced COVID-19 cases in the English city of Liverpool by more than a fifth, researchers said on Wednesday, arguing it was an effective public health intervention despite concerns over accuracy of the devices.

The community testing pilot scheme launched in November, and offered everyone in the city tests whether or not they had symptoms, in an attempt to find a new way to use testing to limit the spread of the coronavirus.

The study, led by the University of Liverpool with government backing, concluded that community testing led to an 18% increase in case detection and a 21% reduction in cases compared with other areas up to mid-December.

The spread of the Alpha variant first identified in Kent made comparisons between areas more difficult after that point, the researchers said.

“The Liverpool pilot showed that community testing can work, and it works well if it is nationally flexible and locally grounded,” Iain Buchan, the University of Liverpool professor leading the trial, told reporters.

Some scientists have questioned the use of rapid lateral flow tests, saying they might do more harm than good, and the U.S. regulator has warned that the performance of the Innova test in use in Britain has not been adequately established.

Despite concerns about the lower accuracy of lateral flow tests compared to PCR tests, the Liverpool researchers said that the devices identified most cases with a high viral load.

The rapid turnaround times had a benefit too, as lateral flow tests give a result in 30 minutes, rather than needing to be processed in a laboratory.

“If it’s positive, (people) get immediate reinforcement that they need to take action… we can see it drove down cases,” said Calum Semple, Professor of Outbreak Medicine, University of Liverpool.

As part of the study, 283,338 Liverpool residents took a test using a lateral flow device between Nov 6 2020 and April 30 2021.Mass-testing reduced Liverpool COVID-19 cases by a fifth, study finds4