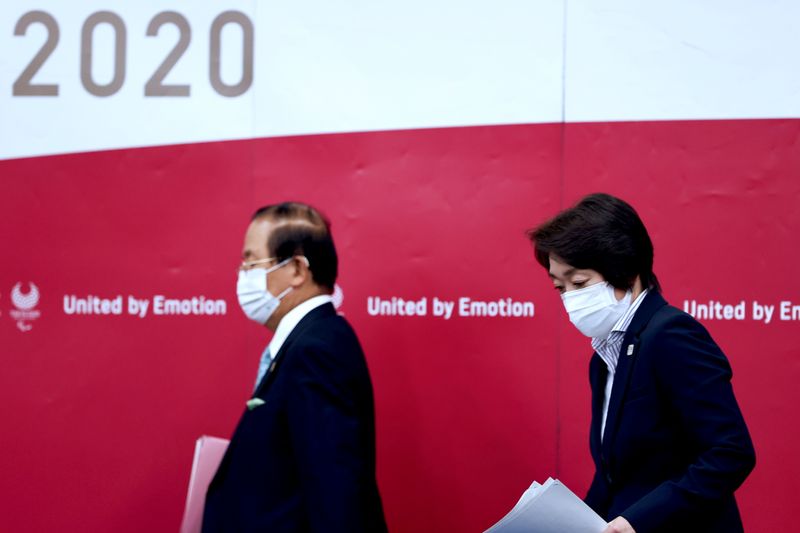 By Ju-min Park and Linda Sieg

TOKYO (Reuters) – After weeks of insisting that the Tokyo 2020 Games could go ahead with spectators, organisers finally bowed to political pressure and rising COVID-19 infections, banning almost all fans from the global sports event just two weeks before it opens.

The decision, made after Prime Minister Yoshihide Suga announced on Thursday a fourth state of emergency for the capital, all but robs the Games https://www.reuters.com/article/us-olympics-2020-coronavirus-factbox-idCAKCN2EE1IO of their last hope for pomp and public spectacle.

Japanese Health Minister Norihisa Tamura said he felt sorry for athletes but that the decision was the right one.

“Please stay at home for this Olympics, and share that excitement with families at home,” he told a news conference on Friday.

The Games are scheduled to run from July 23 to Aug. 8, and opinion polls have consistently shown the Japanese public is worried about going ahead with them during a pandemic.

In a recent media survey, 35% favoured no spectators, 26% wanted some limits and 34% wanted the Games cancelled or postponed. Spectators from overseas were banned months ago https://www.reuters.com/article/us-olympics-2020-timeline-idCAKCN2EE1IN.

“We came to a conclusion that we were able to gain understanding from more people for hosting (the Olympics), if we held it without spectators, although it is unfortunate,” Tokyo 2020 President Seiko Hashimoto said after the decision.

The move also looks likely to snuff out a best-case scenario for Suga, in which he would call a snap general election soon after a successful Games that had rejuvenated his soggy support.

“That scenario has broken down completely,” independent political analyst Atsuo Ito said. An election for parliament’s powerful lower house must be held later this year and Suga also faces a reelection race for the ruling party leadership.

Once seen as a chance for Japan to showcase its recovery prolonged stagnation and a devastating earthquake a decade ago, the event was delayed by the pandemic last year and has been hit by massive budget overruns https://www.reuters.com/article/us-olympics-2020-coronavirus-money-factb/factbox-olympics-money-money-money-the-cost-of-tokyos-pandemic-delayed-games-idUSKCN2EE1K1.

Medical experts have said for weeks that having nospectators would be the least risky option, amid widespreadpublic fears that an influx of tens of thousands of athletes andofficials will fuel a fresh wave of infections.

Tara Kirk Sell, an Olympic silver medalist in swimming and professor at the Johns Hopkins Bloomberg School of Public Health, welcomed the decision to ban spectators.

“It’s obviously disappointing for everyone involved. But I think it reduces the risk quite a bit,” she told Reuters.

Japan has not suffered the explosive outbreak seen elsewhere but has recorded over 800,000 cases and over 14,890 deaths. Tokyo reported 896 new infections on Thursday, the 19th straight day of week-on-week rises.

Just over 25% of the population has received one vaccine shot and supply glitches are causing an initially delayed vaccination rollout to stumble.

Tokyo – which had been counting on a record boom in tourism – has experienced little buzz and excitement.

The Tokyo leg of the Olympic torch relay kicked off on Friday with a small ceremony in a nearly empty park. The relay will be kept off public streets and only small ceremonies with no public spectators will be held over the next two weeks

People will also be asked not to gather for events on public roads, such as the triathlon, though some venues outside the greater Tokyo metropolitan area will allow small numbers of spectators.Olympics-Tokyo Olympics organisers bow to pressure for ‘stay home’ Games